During the beginning of the COVID-19 crisis, the United States faced a data problem.
No free, publicly available platform was available to show which hospitals needed PPE at what levels. As a result, medical supplies were being misallocated at scale.
So we built one.

During the COVID-19 pandemic, Helena led a major effort to respond to a breakdown in vital medical equipment, purchasing and routing more than 37 million supplies to hospitals and frontline workers across the United States.

In the process, it became clear that a more fundamental problem needed to be solved. No free, public platform existed to identify which hospitals needed PPE and in what quantities. As a result, medical supplies were being misallocated at scale.

So we built one.

Helena raced to launch The Covid Network, an online platform that provided real-time data about the state of COVID’s spread across the United States and current PPE needs for individual hospitals.

The result was a single place to connect those in most need of PPE and other essential supplies with those who had it.

Led by Helena Member Will Jack, Simon Hewat and Rochelle Shen, The Covid Network went from conception to operational in just 60 hours.

As the pandemic raged over the ensuing year, the platform was utilized by health systems and suppliers across the country, including the US Air Force.

Figuring It Out The Hard Way

As the COVID-19 pandemic spread across the globe in March of 2020, hospitals worldwide faced a crisis. A huge spike in demand for critical personal protective equipment (PPE) meant that many frontline workers were left without protection against a dangerous new pandemic.

To combat this, Helena launched the COVID Response Project. During the early days of the pandemic, we began to purchase tens of millions of masks, gloves, gowns, and other critical medical supplies, immediately routing them to hospitals and care facilities across the country.

Quickly, we faced a fundamental question: how could we ensure we were sending these supplies to those that needed them most?

At the time, there was no comprehensive database, public or private, that tracked the live need for different types of medical supplies across the thousands of hospitals and point-of-care facilities in the United States. So Helena decided to build one.

We were trying to answer a simple question: where is the need? If we — or anyone else for that matter — had access to one mask or a million, where should we send it? What about one pallet of gloves? One airplane full of gowns?

Our goal was to build a software platform that could apply analytics to this challenge, and help Helena, and other responders like state governments and federal agencies, figure out which supplies to spend where.

First, we needed to get real-time information from every hospital in the country. This would have been challenging enough in normal times. In the midst of a pandemic, chaos reigned.

The hospitals experiencing the worst shortages were overwhelmed — by COVID patients, by media attention, by the fight to secure more supplies — and difficult to get in touch with. When we managed to make contact, the situation became even more challenging. Often, hospitals themselves didn’t even know how many masks (or gloves, gowns, or other supplies) they needed; the situation on the ground was changing hour by hour and day by day, and their inventory tracking systems couldn’t keep up.

Faced with mounting challenges, we reached out to a Helena Member named Will Jack. At age 16, Will was generating nuclear fusion reactions with a particle collider he constructed in his basement. By 23, he had graduated from MIT, developed communications systems for SpaceX’s Starlink Satellites, and co-founded healthcare company Remedy, which developed machine learning models to guide medical care for at-risk patients.

With his background in software engineering and machine learning, Will was a perfect fit for the project. We called him at 6:30pm on Friday March 20th, and asked if he would consider taking a leave of absence to lead our effort to build a software platform that could help solve the logistical dilemma at the heart of the medical supply crisis. Will asked for some time to think, and called back an hour later. He was in.

Over the weekend, Will began building a team. Within hours, he’d recruited Rochelle Shen and Simon Hewat. Rochelle, who studied computational neuroscience at the University of Pennsylvania, was the youngest employee at Civis Analytics, one of the first companies to apply machine learning to elections, then became a deployment strategist at Palantir, where she worked on projects like gun control, financial analytics, fraud detection and healthcare innovation. Simon, a machine learning engineer and entrepreneur, had worked on security systems that ingested and analyzed data from hundreds of cameras, contributed to large-scale pharmaceutical testing efforts, spent time building self-driving technology as a member of Tesla’s Autopilot team, and founded a company, Copilot, that augments heavy machinery with an AI guidance system.

Will, Simon, and Rochelle, joined by a team of volunteer engineers, spent the next 72 hours coding furiously. After three days of minimal sleep, they’d built a prototype.

Their progress was remarkable; in the space of a few days, they had built a tool from scratch that could take in hospital-level demand data, translate it coherently for private and government responders, and facilitate communication between everyone involved.

We immediately began showing the product to its potential “users,” a group that included hospital CEOs and heads of procurement, federal, state, and local government officials, philanthropists donating supplies, and military officers. We set up a daily “standup” call with a group of these stakeholders, took in feedback and suggestions, and iterated the product virtually on the spot, often shipping new features minutes or hours after they’d been requested.

In parallel, the team started building a more elegant and capable version of the platform; one that could track not only on-the-ground requests for PPE, but information about the pandemic at large and how it was shifting.

This updated COVID Network was able to display live predictions about how cases and deaths would evolve across the country, county-by-county. It even evaluated how closely residents were following ‘stay at home’ order or social distancing guidelines by drawing on anonymized cell tower data to calculate movement. Users could also view the total population, poverty rate, and prevalence of common comorbidities in a county — all of which helped responders identify the areas most urgently in need of assistance across the United States.

The platform made it easy for essential healthcare workers to input data anonymously via a special “situation on the ground” form. This protected workers who voiced concern that their jobs would be in jeopardy if they reported their facility wasn’t adequately equipped. Even so, data collection slowed after the initial surge in spring and early summer.

In part, this was good news, signifying that the PPE crisis had eased to a degree, cases were falling across most of the country, and many state governments had instituted their own data collection processes and system.

Unfortunately, because states weren’t making their data public, projects like The Covid Network couldn’t benefit from the information they had aggregated. And even if we had been able to access this, since each state asked its hospitals different questions in different ways, the responses couldn’t be cross-referenced or comparatively analyzed.

As a result, if one had a million masks to give away on the border between Illinois and Indiana, it was accessible data wasn’t available to determine which hospitals in those states — or in nearby Michigan and Missouri — needed them most.

In advance of the pandemic’s second wave and growing PPE shortages in new categories like nitrile gloves, this meant that the COVID Network’s capabilities were still sorely needed. Without direct information from hospitals, however, the platform couldn’t perform as it was intended to.

To solve this problem, we worked with a brilliant group at the venture capital firm Decisive Point, led by Tommy Hendrix. A former Green Beret and West Point and Columbia graduate, Tommy had worked with Helena earlier in the year to chase down depots of masks for the City of New York. Now, he leapt into action, building a fast-response team to conduct direct outreach to thousands of hospitals and care facilities across the East Coast.

Tommy and his team emailed, called, and physically visited hospitals across New York, New Jersey, and Connecticut, to pilot a new, direct data collection approach for the COVID Network. Frustratingly, this approach was stymied by hospital non-responsiveness. People were either too overworked, didn’t see the need, or didn’t feel authorized to communicate on behalf of their hospital systems for fear of embarrassment or retribution. As a result, the inflow of data to the network slowed to a crawl.

While it was difficult to foster widespread adoption of the COVID network among healthcare providers, we noticed that our predictive models for COVID spread were both more granular, and more accurate, than many other models, in part due to their ability to integrate a massive amount of data. Our models looked over anonymized, census-block level cell phone tracking data to understand how and where people were spending time, county-level sociological and economic data to provide a view of the population we were making predictions for, and epidemiologic data to understand the trend of the pandemic.

Through conversations with the Army, we saw an opportunity to extend our model to help them make more informed decisions about how to proactively direct their supplies of PPE to regions that would be in great need soon — hotspots-to-be . We developed a PPE add-on to our model that leveraged expert estimates of PPE utilization for different types of patients to output the predicted supply requirements of several types of PPE for every hospital across the US. The Army used these predictions, along with a hardware-based simulated quantum annealing optimizer, to rapidly reach conclusions about how to most effectively allocate PPE across a given region.

Since March 2020, the PPE crisis — and specifically the allocation problem of assessing the areas of greatest need — has happily become a far less pressing issue. In March 2021, Helena began to sunset the COVID Network, transitioning our attention on the pandemic to other projects, including our work supporting DynaShield — a polymer technology designed to help solve the ‘cold chain’ storage problem with distributing vaccines and biologics.

Personal protective equipment, known as PPE, comprises any type of wearable feature that protects humans from bodily harm or infection. Dedicated PPE from body armor to makeshift masks has been in use for centuries. 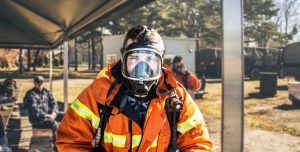 But it was the onset of the global COVID-19 pandemic that made the term a household name, as PPE began to extend far beyond the medical and military communities and into the daily lives of the public.

Helena’s COVID response project purchased and routed items that also fall outside of what is considered PPE.

These items, from diagnostics (COVID tests) to respirators, also include items known as Infection Prevention and Control (IPC) supplies like medical-grade wipes and disinfectant. For simplicity’s sake, this page places all of these items under the term “PPE.”

Helena’s purpose is to identify solutions to global problems and implement them through projects. Each project is a separate, unique effort.

Sometimes, we believe that the most effective method to implement a project is through non-profit action. These projects are designated as “non-profit” on their associated project pages on this website. This page is an example of such a project.