What if we could capture the immense power of the sun, magnify its intensity up to 1,500°C , and reliably store that energy?
It could change how some of the world’s largest and most carbon-intensive industries work, from cement to steel production.
At scale and for the first time, it could commercially replace fossil fuels with carbon-free renewable energy.
It’s happening right now.
And we’re investing in it.

Helena is an investor in Heliogen.

Heliogen has created the world’s first technology that can commercially replace fossil fuels with carbon-free, ultra-high temperature heat from the sun.

The modern world relies heavily on fossil fuels to power our daily lives and the industries we depend on. The global fossil fuel industry generates more than $1 trillion each year, yet the consumption of fossil fuels simultaneously accounts for the bulk of greenhouse gas emissions in the United States.

Renewable power presents a potential solution to the negative externalities associated with the supply and consumption of fossil fuels, yet suffers from a lack of consistent, predictable, and reliable power generation. In the status quo, renewable assets such as wind turbines or solar panels only produce power when the wind is blowing or the sun is shining. Put differently, when the wind calms or the sun sets, wind turbines or solar panels stop producing energy. These patterns in renewable energy production do not necessarily match the patterns of demand for consumers, resulting in mismatched supply and demand.

In order to equalize supply and demand and provide a consistent, continuous supply of power, existing solutions include relying on dirty power generation assets (coal, gas, and petroleum powered generators) to make up for gaps in supply.

This leaves a partial dependence on fossil fuels as the only viable choice today for consistent power supply and means that the world must continue to invest in dirty power generation no matter how much wind and solar is built. Moreover, these problems with renewable power today act as a barrier to the development and commercialization of technologies, both green and futuristic, that require cheap and clean energy to be viable.

For example, various carbon capture technologies today leverage highly energy intensive processes to capture a pure stream of CO2 from ambient air. There is existing concern around the cost of running carbon capture systems given energy use; however, there is also near consensus that carbon capture must play a role in our efforts to halt the warming of our planet.

Carbon capture technologies could scale up more quickly given a reliable supply of cheap renewable power. A solution, therefore, will not only directly reduce the carbon emissions associated with dirty power but also spur increased interest in other sustainable activities and leading-edge technologies.

Hydrogen fuel could serve as a green alternative to fossil fuels, depending on how it is produced. Hydrogen has a high energy efficiency and can be stored safely long term, as a gas or liquid. In fact, hydrogen is roughly three to seven times as efficient as fossil fuels (by weight, for gasoline and coal, respectively). However, despite being the most abundant element in the universe, hydrogen rarely exists in nature on its own.

Today, hydrogen is produced using a process called electrolysis. Electrolysis of water leverages the positive and negative charges of electricity to effectively force water molecules to break into constituent elements (hydrogen and oxygen). Unfortunately, the bulk of hydrogen is produced using electrolyzers powered by fossil fuels, meaning the hydrogen is not green. As the key inputs to electrolysis are water and electricity, if we can transition away from fossil fuels and power electrolysis of water with cheap renewable energy, then the hydrogen produced could be green (and cost efficient), providing society with an entirely clean alternative fuel. However, green hydrogen requires cheap renewable energy that can be delivered consistently and predictably – something we lack today.

Heliogen seeks to leverage the sun’s power to solve many of the issues associated with renewable energy today. To do so, Heliogen develops and builds plants that generate energy from the sun and couples generation with long term thermal storage to provide a continuous supply of cheap renewable energy.

Heliogen’s plants concentrate the sun’s energy to capture solar heat to be used as power, producing extremely low cost energy. Because the plants not only generate industrial heat and power from the sun but also provide thermal storage (storing energy by heating up air and rocks), Heliogen’s sunlight refineries have a higher capacity factor than a standard solar power plant – able to rely on storage during bad weather or at night.

The result is a technology that can provide significantly cost-effective renewable energy more consistently than existing solutions, and the cheap energy produced allows the running of industrial processes that would otherwise be economically inefficient – for example creating the real possibility of replacing fossil fuels with green hydrogen fuel or scaling up cost efficient carbon capture technologies.

Given the potential impact stemming from replacing fossil fuels, Heliogen is most focused on commercializing HelioFuel in order to develop increased interest in green hydrogen production and use. However, as mentioned in the previous section, the supply of cheap, green, consistent power is needed for more than green hydrogen production. Heliogen can help decarbonize industrial production of materials such as steel or iron (which often relies on dirty energy, producing significant emissions) by providing green HelioHeat or HelioPower.

As such, Helena believes the potential impact of Heliogen’s technology goes far beyond the sale of green hydrogen.

Sunlight Refineries represent a significant development when compared to other solar power generation systems. First, as compared to a standard photovoltaic system, Sunlight Refineries can provide power when solar panels otherwise could not – for example during bad weather or at night. Thus, the cost per unit of energy is lower for Heliogen when considered holistically, given a higher capacity factor (ignoring the cost to build and install).

Second, Sunlight Refineries incorporate advanced technology and design principles that we believe are increasingly necessary in industrial settings. The installation and maintenance of a Sunlight Refinery can be done robotically, and the positioning of heliostats, as mentioned, is optimized using artificial intelligence sensitive to the sun’s movement.

Moreover, Heliogen relies on a modular design with numerous small heliostats, minimizing the environmental impact or local disruption caused by the build and operating of a Sunlight Refinery. Third, and related, Heliogen invested heavily in improving the design, build, and operation of heliostats. As a result, Heliogen’s heliostats are significantly smaller and more cost-efficient to manufacture and operate than any standard heliostats on the market that Heliogen began with.

Heliogen solves many problems associated with renewable energy by providing a consistent supply of cheap solar energy. The technology will motivate the growth of other green technologies that require such a supply of cheap renewable energy, such as hydrogen fuel, while generally supporting the transition away from fossil fuels. Ultimately, Heliogen could play a crucial role in the necessary decarbonization of our daily lives and industries.

Adoption: A Step Toward Decarbonizing Industry

One major implication of Heliogen’s technology is its ability to accelerate the decarbonization of industrial processes core to the global economy. On March 24, 2021, Heliogen announced a major step toward that goal.

The company’s proprietary, AI-powered technology was selected by Rio Tinto to use heat from the sun to generate and store carbon-free energy in order to help power California’s largest open pit mine.

According to Heliogen and a CNN report of the announcement, the project will be “the first instance in which concentrated solar technology is used to power a mine in the United States, and perhaps the planet.”

The project will take place in California’s Movaje Desert. At a size of about 100 football fields and utilizing an array of 40,000 Heliogen mirrors, the system will use AI to control a network of mirrors that concentrate sunlight to capture energy used to make steam. Heliogen’s technology will also store the captured energy in the form of heat, allowing it to power nighttime operations and providing the same uninterrupted energy stream offered by legacy fuels.

The project will be “the first instance in which concentrated solar technology is used to power a mine in the United States, and perhaps the planet.”

The Boron operation mines and refines borates into products ranging from fertilizers to construction materials and is producing lithium carbonate from a demonstration plant. The site currently generates steam using a natural gas cogeneration plant and natural gas fired boilers.

Heliogen’s installation will supplement these energy sources by generating up to 35,000 pounds per hour of steam to power operations, with the potential to reduce carbon emissions at the Boron site by around 7 per cent – equivalent to taking more than 5,000 cars off the road. Rio Tinto will also be assessing the potential for larger scale use of the Heliogen technology at Boron to reduce the site’s carbon footprint by up to 24 per cent.

Rio Tinto Chief Executive Jakob Stausholm said: “This partnership with Heliogen has the potential to significantly reduce our emissions at Boron by using this groundbreaking solar technology, and we look forward to exploring opportunities across our global portfolio.”

Heliogen CEO and Founder Bill Gross said: “Since its founding, Heliogen has been laser-focused on decarbonizing industrial sectors, including mining. As a result, this agreement with Rio Tinto is incredibly gratifying. We’re pleased to find a partner committed to cutting its contributions to climate change. We’re also pleased that Rio Tinto is exploring our technology to play an important role in helping reach its sustainability goals while dramatically reducing its energy costs. More broadly, we’re excited to take this important step as we pursue Heliogen’s goal of avoiding more than 1 gigaton of CO2 emissions – 5 per cent of the world’s annual total – from the global economy by turning sunlight into an industrial energy source.” 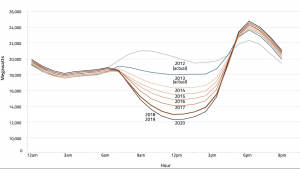 A helpful way to visualize this issue is known affectionately as the “Duck Curve.”

In the graph above, note the sharp decrease in demand for energy during mid-day, and the sharp increase in demand during the evening. Think about how this connects to your personal energy usage: you’re less likely to use electricity in your home around noon, when there’s an abundance of natural sunlight when and members of your household are at work or school vs. during the evenings, when the sun has set and you’re preparing dinner.

Renewable power generation assets generally suffer from a reliance on unpredictable and uncontrollable natural weather and phenomena. One key measure of a power generation asset is its capacity, or the maximum power the asset can produce (assuming running at full capacity). The capacity of the assets helps determine the cost per unit of energy and is determined by the manufacturer of the asset. However, though a wind turbine might have a large capacity, if the wind stops blowing, its capacity fails to illustrate that the turbine will not be producing power 24/7. Relying on the capacity to understand the cost of the power generated, then, would suggest an overly optimistic situation (artificially lowering costs).

Externalities are the secondary and related outputs of activity on uninvolved parties, which in many cases are unintended. For example, the carbon emissions generated at coal power plants are not a desired output but instead a byproduct of generating power. Importantly, externalities have an impact on those not directly involved in the activity.

Helena’s purpose is to identify solutions to global problems and implement them through projects. Each project is a separate, unique effort.

Sometimes, we believe that the most effective method to implement a project is through for-profit action, including investment and/or the founding and operation of businesses.

These projects are designated as “profit” on their associated project pages on this website. This page is an example of such a project.

To implement efforts through for-profit means, entities including Helena Special Investments, LLC, a privately-owned limited liability company that operates in business activities that have the potential to transformatively address societal problems while targeting attractive returns to investors, are utilized.